Near Wenceslas Square, surrounded by busy boulevards, hides a unique space in front of the public, which even the people of Prague often have no idea existed. An oasis of calm in the courtyard of the Sylva-Taroucca Palace, also known as the Piccolomini Palace, which, however, became most popular with Savarin.

However, it will soon become one of the cultural and social landmarks of the capital. The development company Crestyl, in cooperation with the world-famous British architectural and design studio Heatherwick, plans to transform it into a luxurious business and social center following the tradition of Prague passages. The megalomaniac project for ten billion crowns should start building next year.

A dilapidated gem out of public interest

The Savarin project will be created by the reconstruction of buildings within a large area consisting of four consecutive parts. This will connect Wenceslas Square with Na Příkopě, Jindřišská and Panská streets, which delimit the area. According to the developer, 55,000 square meters of shops, restaurants and offices should be built on an area of ​​1.7 hectares.

The part of the complex, hidden from the public's reach behind the facades of Baroque and Art Nouveau buildings, has been decaying for many decades. An important part of the construction of the project will also be the extensive reconstruction of the interior of the historic premises, especially the original Baroque riding school, which will become the heart of the entire complex. Although it will not be the only commercial building, several underground floors will be created below it, which will connect the entire complex with the entrance to the metro. 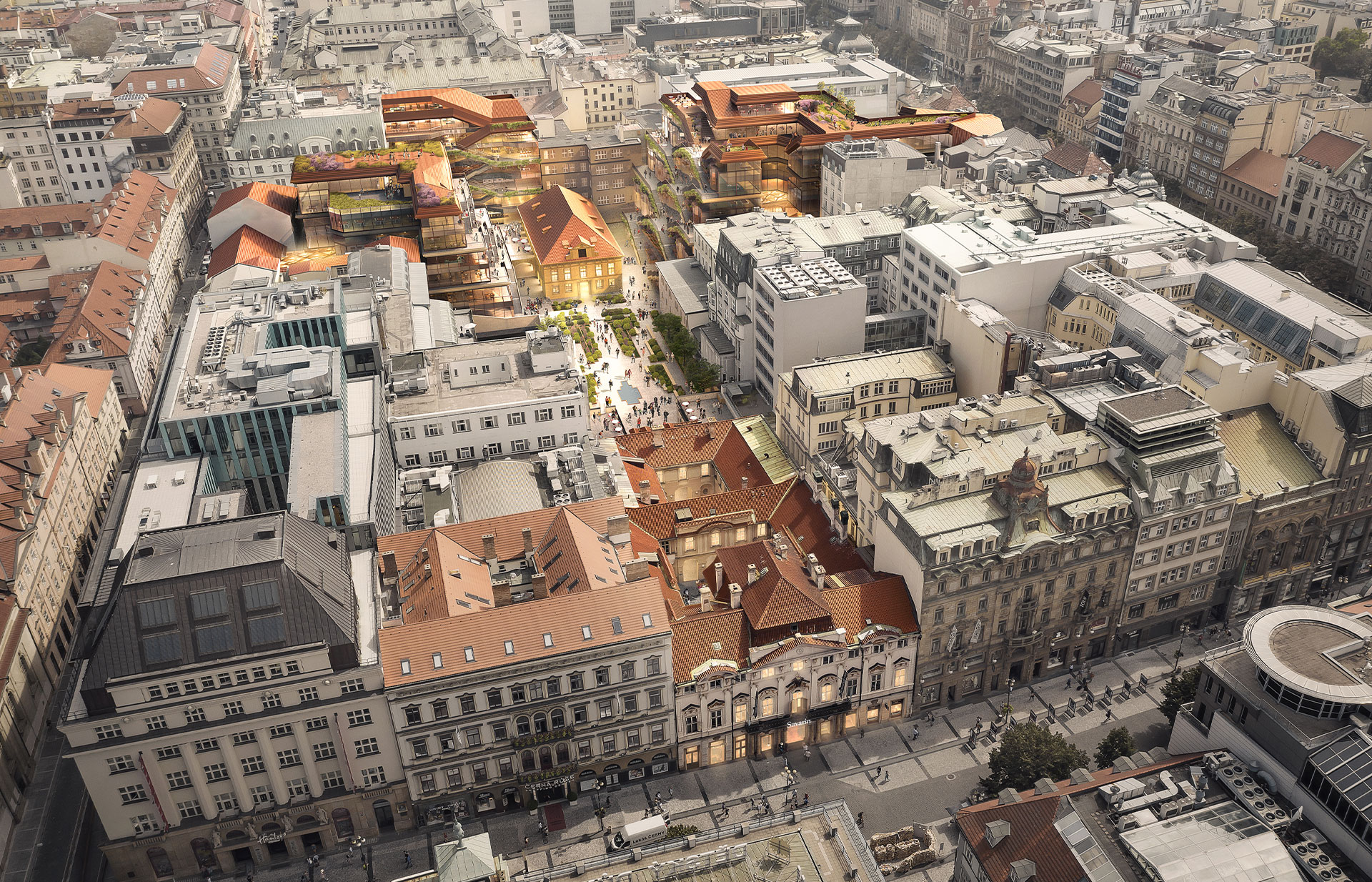 The Slavic epic by Alfonso Mucha will also be given space

The individual blocks of the complex, which currently form separate interconnected parts, will be carefully adapted to their specific use. The part oriented to Panská Street will be Time Out Market, which offers a range of gastronomic services, while the block to Jindřišská will offer restaurants connected with green areas. A commercial passage with shops and boutiques will be created in the premises facing Wenceslas Square.

All three blocks will then connect the area of ​​the Savarin Palace itself with the historic riding school building, which will be transformed into a cultural and social space with a square and a park full of greenery. The entrance to the Savarin Palace itself is located in Na Příkopě Street. Among other things, the design also envisages spaces for the placement of the Slavic epic Alfons Mucha. The developer offers Prague, which has long been looking for a suitable location for a world-famous work, this option completely free of charge. 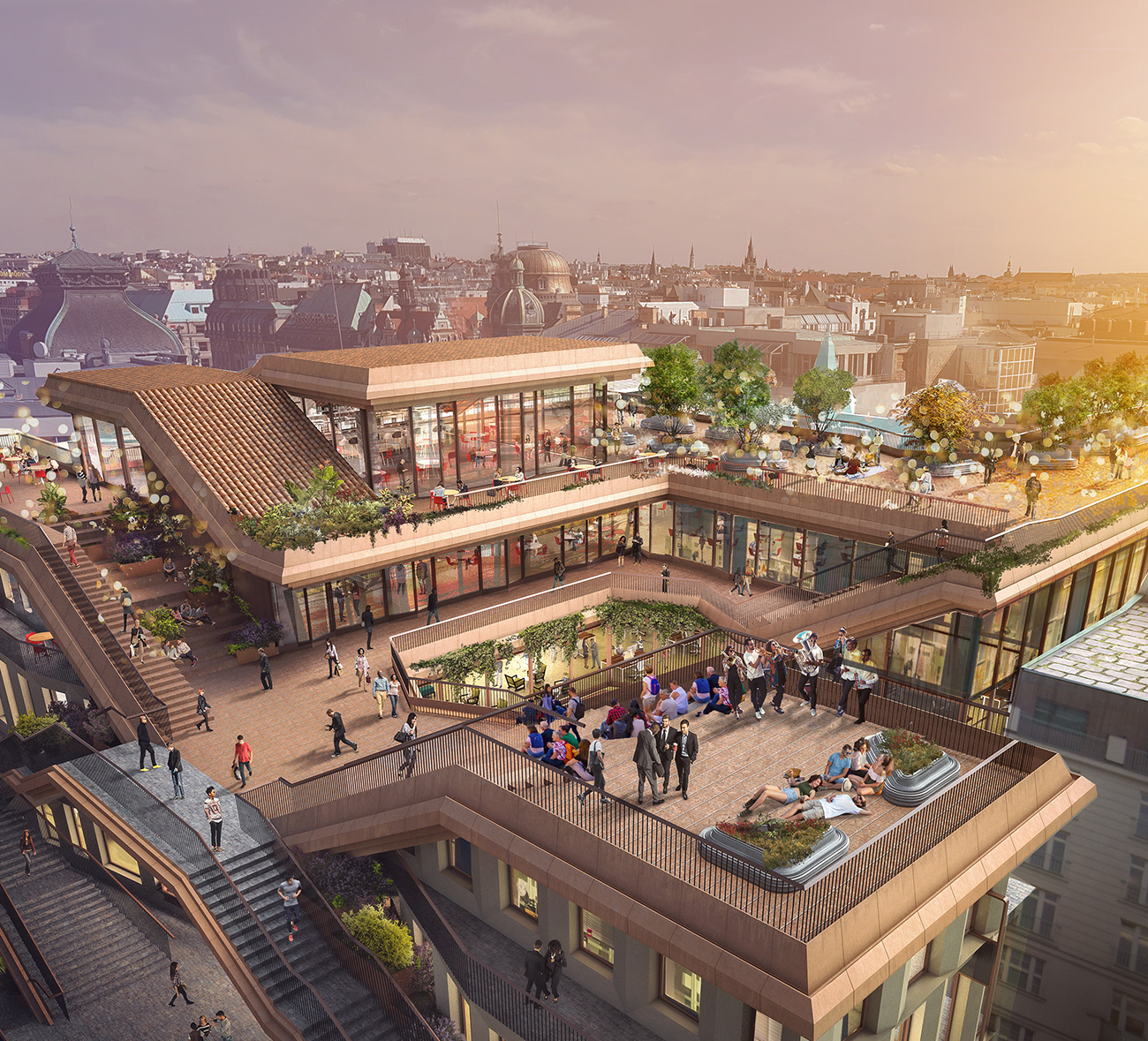 Due to the need for extensive and very sensitive reconstructions of protected architectural monuments, Crestyl invited the help of British designer Thomas Heatherwick. His Heatherwick studio is one of the world's most respected architectural studios, with extensive experience in renovating historic and industrial buildings. His portfolio includes projects such as the Zeitz MOCAA Museum of Contemporary African Art in Cape Town, Google headquarters in London and California, and the reconstruction of the 130-year-old London Olympia Exhibition Center.

As part of the Savarin project, the studio plans to connect the renovated historical monuments with modern elements including an outdoor staircase and publicly accessible roof terraces with gardens. The purpose is to build on the architecture and concept of loggias and offer visitors unique views of the panorama of Prague and the roofs of the Old and New Towns in the heart of the historic center. Outdoor open areas are scheduled to occupy more than a third of all areas.